This isn’t an easy post to write but in order to jump start my writing on this blog again, I feel it’s important.  The new year has been tough for me and this blog.  No posts and, even worse, little inspiration to write them.  I’ve been struggling with something and I finally thought it would be best to just get it out in the open in hopes that exposing the blockage will remove it.

I’ve been involved in the hobby since the early 1980’s.  I’ve talked about it in past posts and have a bit more to say in the future as well.  I started the blog because I feel I have some knowledge from my experiences and wanted to share.  I followed my instincts and thought I had a good plan.

Then, I started to get more involved in Twitter and exploring what is going on with this new “roleplaying renaissance” and wow, were my eyes opened.

A lot of what I wanted to talk about is already being done and explained.  So many talented people already doing some amazing things!   Games are being live-streamed every day on Twitch, talk shows and podcasts cover the deeper elements of storytelling and roleplaying.  What an amazing time it is to be so interested in roleplaying and gaming!  We have awesome discussions and a vibrant community while public perception shift more and more towards acceptance of the hobby.  I wanted to be playing in live-streams and having these cool discussions.

Most of the wind was taken out of my sails when I started feeling that I was just the old graybeard coming late to a party I had been looking forward to most of my life.  It knocked me down and I let it cause a bit too much self-reflection and way too much self-doubt.  So much so it’s taken me a month or more to get the words for this post.   However, when I get down there is a favorite saying of mine which I go to repeatedly.  It comes from the movie Ghosts in the Darkness, “Everyone has a plan until they get hit…  The getting up is up to you.”

Then, I realized something else.   I can’t be the only one that feels this way.  There are probably a ton of other folks out there feeling a similar feeling.  “My stuff isn’t good enough/ on par with what is happening now.”  “I’m just another regular ol’ D&D player, what do I have to offer?” “I just got started but will never be that good.”  “My GM skills are really weak.”

Think of it this way, what if any of the folks we are looking up to in the industry had given in to their self-doubt?  We wouldn’t have the historic situation we have now, would we? 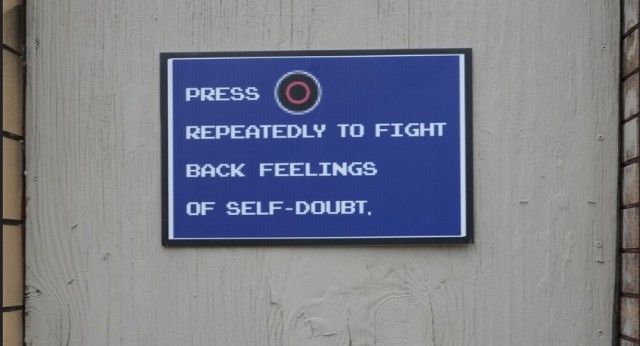 All kinds of voices are needed for this hobby/way of life.  Our kingdom of gaming geekery is vast and full of resources.  We’re all needed.  New players, veteran players and, yes, even us grey beards. We’re all a part of this and every productive voice adds to the whole in one way or the other.

If you’ve been down lately and if you feel like it, I’d like for you to get up too.  Do something small.  Speak up.  Write something.  Draw something.  Paint a mini.  Sketch a map.  I don’t care if it’s your first attempt or your hundredth.  Maybe you were down before but are doing better?  How about talking about it for others to have inspiration?   Whatever it is, put it out there for all to see.  Put it on Twitter or Tumblr or your blog or anywhere.  If you do, reply here, tag me on Twitter or use the hashtag #GeeksGetBackUp.  I would like to cheer you on and throw a virtual high-five because this shit isn’t easy when you’re battling yourself.

2 thoughts on “Roll for Self-Doubt”

This site uses Akismet to reduce spam. Learn how your comment data is processed.

My Tweets
Sunrise this morning was particularly golden. (Sunday, 3/29) Wishing everyone all the best during this crazy time. Take care of yourself and have patience with others. We're all a little stressed but we can get through with patience, flexibility, and kindness. #sunrise #sunriseoftheday #warmth #kindness #peace #mamaearth #amorfati
My version of social distancing. Nice morning trip out for some fishing. Decent luck and got to see my first snake of the year; a Northern Watersnake trying to do some angling of his own. Caught a nice mess of bluegill and landed my first bass of the year. Not bad for late March. #fishing #bluegill #peacefulplace #snakes #herping #socialdistancing #enjoylife #mamaearth
%d bloggers like this: